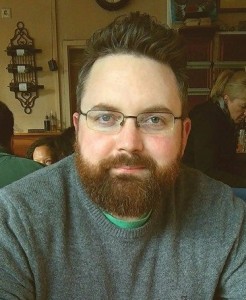 Pat Hynes is a writer from Roundfort, Co Mayo. He completed an MA in writing at NUIG in 2007. He is currently part of the Fishamble: Connect programme in Limeick’s Belltable Theatre. The Abbey Theatre (Ireland’s National Theatre) has described his writing as ‘darkly poetic’. His plays have been shortlisted for Listowel Writers’ Week Eamonn  Keane  Award, RTÉ’s PJ O’Connor Award, and The Bruntwood Playwriting Award. He was awarded Best Director at the Jerome Hynes Memorial Competition. As an ensemble member of Mephisto Theatre Company he acted in a number of productions & co-produced a show for Edinburgh Fringe Festival.

In 2012, he co-founded Scéal Eile Productions. Pat’s radio play Sparks was short-listed for RTÉ’s PJ O’Connor Award, and he has since adapted it as a one-man stage show. Sparks debuted at Galway’s Town Hall Theatre in July 2012, and has since been performed Galway; Clare; Dublin and Edinburgh Fringe Festival. Pat now lives in the Burren, Co Clare with his wife Éibhleann.