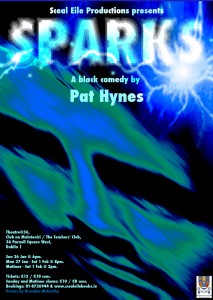 ‘Hell Goes Round and Round’

‘Sparks’ is a black comedy for stage written and directed by Pat Hynes. The Abbey Theatre (Ireland’s National Theatre) has described his writing as “darkly poetic”. Pat was awarded the Jerome Hynes Best Director Award for his first play ‘King for a Weekend’. His play ‘Wrecked’ was longlisted for the Bruntwood Prize. ‘Sparks’ is his third play. It was first written as a radio play and in this form was short-listed for RTÉ’s PJ O’Connor award.

“Have you ever wished you could re-live just one day in your life? Gerry did…but he picked the wrong day.

Set in post-boom Ireland, this savagely funny, lyrical and visceral one-man show is an journey though a tradesman’s memories of one pivotal day in his life. Influenced by the work of Irvine Welsh, Enda Walsh, Beckett and Flann O’Brien,  this unique & entertaining play resonates with audiences long after they have left the theatre.

‘Sparks’ has been performed by Darren Killeen (Game of Thrones, Ros na Rún) and is designed by Éibhleann Ní Ghríofa.

“Excellent…I enjoyed the smart pacey dialogue, the skillful acting as the number of characters built up, the smoothness of the production – best play I’ve seen in years”
“Utterly f***ing brilliant!”
“I hugely enjoyed this crazy trip inside someone else’s psyche”
“Brilliant… really funny”
“Outstanding… funny, tragic, poignant – a play about a guy we’ve all known. Go see it!!”
“Blackly humorous, an examination of panic, loss of control and desperation”
“A dark insight into mental turmoil. Brilliantly written & acted”

Run Time is 60 minutes. You can read a full review of one of the Dublin performances here.